The example uses TeeChart’s Circular and Numeric Gauges to simulate the acceleration of a 2016 Subaru BRZ car. 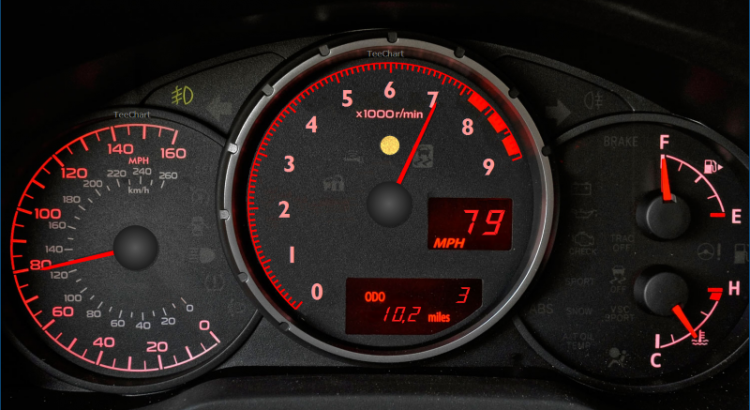 Example code for this demo may be downloaded from the github repository:

This is a simulation only and though the basis is fairly faithful to empirical results it does not make claims to authenticity.

Some factors that the demo takes into account:
– Redline (change gear when reaching the redline)
– Powerband; keep the engine in the powerband after the changeup
– True top speed. The demo is close to reported performance data

For this demo not all the of gaugeable data has been put into TeeChart Gauge format, the fuel gauge and oil temperature gauge have been left alone, but they could also be automated.

The demo uses an image of a dashboard and superimposes TeeChart’s circular gauges on it. One of the dials has been remade from scratch and the other uses the existing scale.

Setting up the demo

The Speedometer is formed by a TeeChart CircularGauge.

The tacho scale has been completely rebuilt by the TeeChart Editor and some runtime code modifications. It reflects the original scale minus the redline zone, that, whilst it could be defined by TeeChart itself, remains part of the background image.

Gearchange indicator, digital-readout speed and distance covered are all included in two NumericGauges in the TeeChart “RevChart”.

The speedometer is limited to using a CircularGauge needle. The Gauge’s scale remains that of the underlying image.

The demo is controlled by three arrays:

The rev limit for which to change gear has been defined at 7500rpm. The secsToChange array defines the time through each gear and the speedRevDropStart array, the revs to drop down to after a gear change. The speedRevChgUp array sets the top speed in each gear.

The demo form contains a Timer that is activated to run the simulation.
Control of the gears, speed, revs, distance and over-rev warning light are all controlled when the timer triggers.